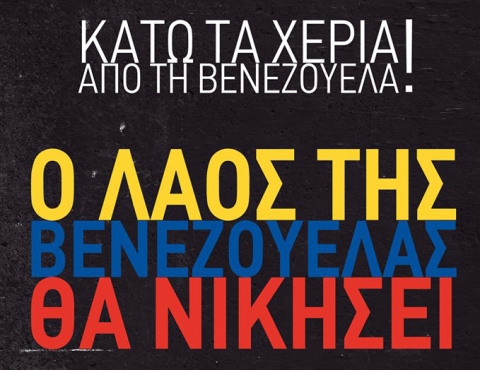 Condemnation of the new aggressive move of imperialism against Venezuela

Declaration of NAR (New Left Current for the Communist Liberation)

NAR condemns the new attempt to overthrow Venezuela’s legitimate government by mercenaries who entered the country from Colombia, with the aim of assassinating government officials and carrying out other sabotage. The US government, despite the state of emergency caused by the coronavirus pandemic, continues its terrorist acts against the people of Venezuela, as it finds that the embargo policy it has been pursuing for the last few years does not bring the desired result. The funding and multifaceted imperialist support of the puppet of the reactionary opposition, Juan Guaidó, has proven equally ineffective so far, despite his ongoing attempts to overthrow the government.

The people of Venezuela, with their self-organization, are repelling all these efforts, putting the brakes on the aggression of American imperialism, which has so far been expressed through open interventions in several Latin American countries. Together with Cuba, they are resisting the US economic war against them, in cooperation with the European Union and the reactionary governments of Latin America.

The people of Venezuela and internationalist solidarity will win!