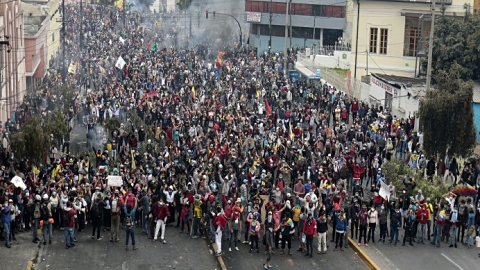 Great victory for the people of Ecuador! The modern tyrants are not invincible

The indigenous communities, the workers and the students of Ecuador revolted against the austerity and the neoliberal reforms that president Moreno signed in order to secure loans from the IMF. The peoples of Latin America have known for decades the consequences of the IMF’s policies. In Venezuela they responded with the 1989 Caracazo and in Argentina with the 2001 Argentinazo. In Ecuador the indigenous people’s movement overthrew three presidents before 2007. It was these inspiring uprisings and the general rise of the movement in a series of countries that forced the governments of the so called “pink tide” to implement measures like the partly abolishment of the debt and to dispute, in a certain degree, the neoliberal dogma and the domination of USA imperialism. The limits of these governments led to the reorganization of the conservative political staff, who proceeded to a severe anti-popular reactionary counterattack (from Argentina’s Macri to Brazil’s Bolsonaro). It is no coincidence that Moreno was, at first, elected as the successor of the previous centre-left president Correa, having originated from the same electoral coalition.

As the clock seemed to be ticking backwards, the uprising and the first victory of the Ecuador people comes as a reminder that modern capitalism is not invincible and that the people can achieve victories against their oppressors.

President Moreno tried to repress the popular revolt with a massive wave of crackdowns, the enforcement of martian law, curfews and assassinations. He is the same president that handed over Julian Assange to the US and agreed to install US military bases in his country. The deal with the IMF, the doubling of oil prices, the 60-75% increase in gasoline prices, the privatizations and the enforcement of flexible labor met the united opposition of the farmers, the workers and the students of Quito and other cities in the country. The protesters were organized and determined, they took over the streets and then the parliament and the ministry of Finances, and practically seized control of the country’s capital city for 12 days, forcing the president to escape to a coastal city. The threat of a military intervention in Quito had the opposite effect as it radicalized the protesters’ barricades and increased their numbers, while also creating cracks in the ranks of the armies that were ordered to slaughter the people.

The fleeing president was forced to come to dialogue and ultimately announce the revocation of the reforms planned by the IMF deal. It is a victory that comes in an era when the advance of barbarism seemed unchallenged and the “there is no alternative” dogma invincible. Surely, each victory is not guaranteed, but the overthrow of the IMF policies can be the signal for a new era of revolts, anticapitalist labor struggle, communist organization and programmatic establishment.

NAR and nKA are addressing a message of internationalist solidarity to the struggling people of Ecuador. The peoples can win!