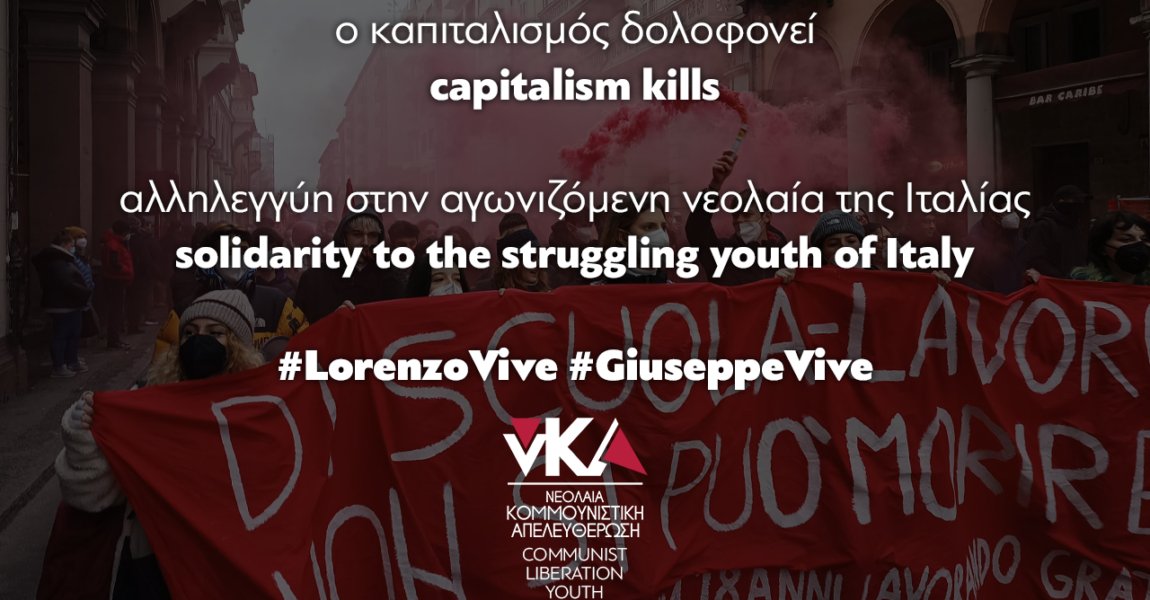 From Italy to Greece, struggle for Education – Work – Freedom

Last months, students in schools are fighting -with huge protests and occupations in many Italian cities, for proper health measures against covid-19 in schools, for the increment of state funding for education, which is suffering from staffing and infrastructure shortages.

The bad news of the death of the 18 years old student Lorenzo Parelli, came in this situation. Basically, Lorenzo was murdered from the employers and capitals, at the last day of his internship – apprenticeship (which is obligatory for all students in Italy) in a metallurgical, iron company, where he was crashed by a heavy pipe. The investigation showed that the necessary protection measures were not observed in the slightest.

These news of the unfair death of Lorenzo, filled the rage of all the youth of Italy, who made huge protests, in dozens of cities. The state’s answers were massive repressions. Youth’s statements like “We know who is to blame” and “At school and at work we won’t die” show that the students know the real enemy. The capital, the employers and governments, who want for their own interests and wealth, children, youth and in general workers, working under miserable working conditions without any protection measures.

Youth in Italy not only did not be afraid of the repression but continues to organize huge protests such as in 18th of February, school occupations, general meetings, in hundreds of schools of the country and dozens of cities. Unfortunately, another young man, 16 years old Giuseppe Lenoci, was killed a few days ago, in another labour accident, as a passenger in a corporate vehicle.

From Greece to Italy and in every small or big city of this world, the conclusion is only one. Capitalism kills. The system of the profit and exploitation, which wants people to work in slavery – working conditions, with minimal earnings in order to enrich the capital, must be defeated. It cannot be reformed.

Struggling youth and people, working class will ruin capital’s plans. Power and Solidarity to the struggling youth of Italy who want to breathe, to the 40 injured students of the protest in Torino, to the communists who fight for a free, fair and without exploitation society.