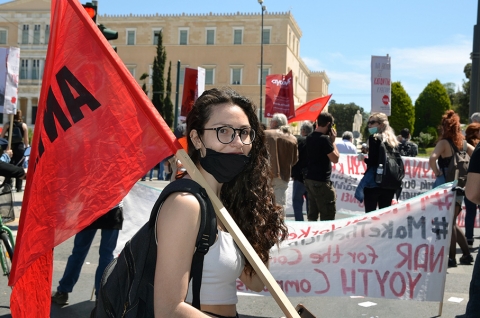 May Day was celebrated in Greece with mass demonstrations

In many cities in Greece, May 1st was celebrated with mass marches sending a message that workers won’t pay the new economic crisis after the pandemic.

Unions and forces of the anti-capitalist left organized rallies in Athens, Thessaloniki and other cities with protection measures and keeping their distance, but going against government’s ban.

The demonstration of the May Day in Athens and the march to the Parliament took place with mass. Dozens of union banners, many collectives and organizations took part in the march. Thousands of protesters took to the streets to protest against wage cuts, flexible working conditions and the suspension of worker’s rights.

At the head of the march was the Union of Contract Employees in the Asylum Service, which is on a long-term strike. The workers that assist the refugees in Greece organized their indepentend Union and the government fired 17 of its members and the predisent among them. There is also a movement of teachers and students in progress, as the government seeks to pass a law for new class barriers to education during the pandemic crisis. The schools and univercities are closed because of the lockdown, so there is no way for a strike but May Day will always be a day of struggle.