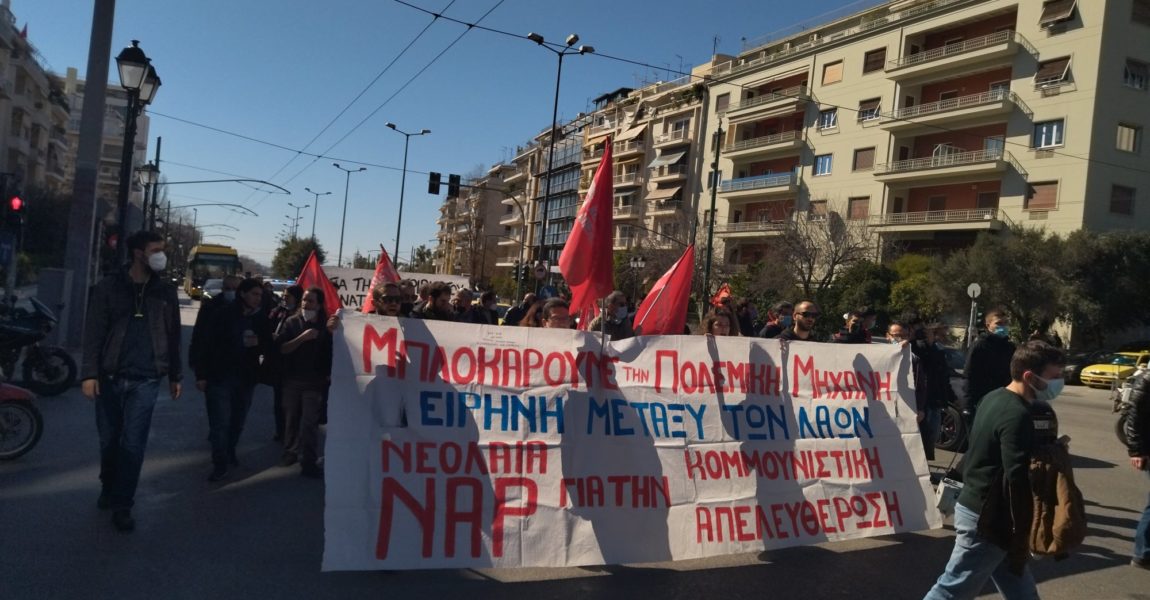 No to Russia’s invasion of Ukraine,
No Greek involvement in the US-NATO plans
Struggle for the peace of the peoples in the new era of capitalist warfare

Russia’s invasion of Ukraine is a major step in the escalation of capitalist rivalries, a historic act that pushes humanity further into an era of open warfare for the benefit of the capital. The Putin administration’s decision to invade Ukraine is not determined by the need to «protect the people of the Donbass People’s Republics from the Ukrainian fascists,«. It is a move to promote the interests of Russian capitalism in the Ukraine region and beyond.

The cause of the war lies in the new phase of Western (US-EU) competition with Russia and China. The unresolved capitalist crisis and the relative decline of US hegemony (Afghanistan, Syria, etc.) make American capitalism more aggressive by trying to encircle Russia directly, but also China (AUKUS agreement, Taiwan status dispute, Chinese Sea, Hong Kong).

The war in Ukraine is the first episode of the new era where capitalist rivalries will be resolved more and more often by resorting to arms. The expansion of NATO’s aggressive coalition into Europe and beyond till the Russian border, the open targeting of Russia and China in recent years, and the new arms race marked this dangerous course. The United States has shown that it is determined to use its vast military arsenal to offset its economic decline. The allegations made by the US and EU member states against Moscow are completely hypocritical, as it is these forces that contributed to the disintegration of Yugoslavia by drowning the Balkans in blood, it is them who invaded Iraq and so many countries, it is them who inflated the reactionary and nationalist sails of the Ukrainian regime.

Russia’s attack on Ukraine has absolutely nothing to do with the anti-fascist sentiments of the people and the «de-Nazification» of the Kiev government, as Putin claimed. Russia is also reacting militarily to NATO moves, following its successful involvement in Syria, Libya and elsewhere, and believes it can rely on an alliance with China. It regards the periphery of the former USSR as the exclusive sphere of influence and domination of Russian capitalism. The Putin government has intervened militarily to quell the insurgency in Kazakhstan. It is them that suppress the workers and communists in the Donbass Peoples’ Republics. The 2014 uprisings in Donetsk and Luhansk were anti-fascist, with labor tendencies that challenged the domination of local oligarchs. Moscow and Russian nationalism sought to stifle these radical elements of the 2014 uprisings.

Putin’s very anti-communist attack on Lenin and the Bolsheviks, the repeated statements that «there is no Ukrainian nation» mark the strong revival of Greater Russian nationalism, whose uncompromising opponent was Lenin, and  whose practical overcoming came through the foundation of the Soviet Union. That is why Lenin is a common enemy of both the far-right regime in Kiev, which was imposed through the symbolic destruction of his statues, and the rhetoric of Putin, who devoted most of his speech to the attack on him. «Decommunization» is the common goal of the two nationalisms.

These rivalries are the greatest proof of the destructive nature of modern totalitarian capitalism that has entered a super-reactionary phase and in the face of profit, in the face of world domination, does not hesitate to drown in blood, movements, peoples, entire countries! The people of Ukraine, the autonomous Donbass regions and Russia will pay the price of this war with their death toll, the refugees and their further impoverishment. The intensifying global imperialist rivalry threatens the very survival of humanity.

The dangers for our country are growing. The transformation of Alexandroupolis into a hub for the NATO offensive to the north, the exploitation of the strategic base of Souda, the increasingly intense military involvement of the Greek state in all sorts of conflicts brings new troubles, not to mention the economic consequences that are being borne by the people. At the same time, the government of Nea Dimokratia (New Democracy) appears as the good soldier of NATO, while the competition of the bourgeoisies of Greece and Turkey is intensifying in the new phase.

The peoples have nothing to gain from the imperialist competition or their identification with one pole or the other. The re-foundation of an independent from the bourgeois interests, revolutionary, internationalist, communist movement with a strategic response to the new “age of monsters” is now imperatively necessary. A strong broad anti-imperialist-anti-capitalist movement against bourgeois competition, war preparation, racism and nationalism is necessary.

Only through the constant struggle against the «enemy in our own country», against the strategic agreements of Greece-USA-France and the political forces that signed them, against the capital and the government that is lined up behind the adventurous and belligerent policy of the USA- NATO, workers can win the peace and the life they deserve.

No Greek involvement in the war in Ukraine.

Close the US military bases, no to the transformation of Alexandroupolis into a NATO hub.

Greece out of NATO.