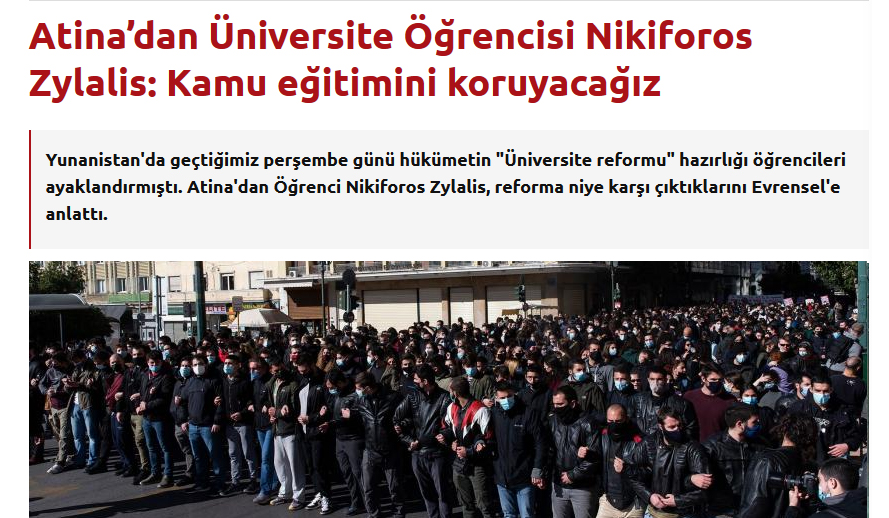 What does the governmet’s bill for universities contain?

The government of New Democracy introduces a bill that will strike a hard blow at public and free education, especially academic education and the terms and ways of how the Greek university operates, for more than four decades. In particular, the main changes that this bill contains are: a) A new regulation in the system of access to the university, which blocks many students from admitting to the university based on their score and the number of available places, which will in turn result in the exclusion of about 20.000 students from higher education next year. And surely, this mostly concerns the students that belong to the working class and possess a low economical status, since they won’t have the ability to pay for the fees that coaching classes require, while the competition for a ticket to higher education will be more fierce. B) Moreover, this bill imposes a maximum studying duration for the university students, which consists of their normal term and two more years. This means that if you haven’t gotten your degree by that time you will be expelled from the university. C) What is more, the bill introduces a mandatory system of disciplinary boards, which will target students who don’t cope with the strict rules and regulations of the university and will therefore be punished or even expelled. D) Lastly, the government attempts to put police forces in the university grounds, that will have the jurisdiction to prosecute and even arrest students using violent methods.

Anybody in their right mind can understand that this bill is monstrosity and has already been rejected by the academic community. Especially students, combat this bill with all available means, organizing massive protests and general assemblies against the measures that will be imposed if it comes to pass. And the basic reason for our opposition is that this bill will indefinitely undermine public education according to our needs and will Instead marginalize it in favor of the interests of corporations, private collages and their profits. In the meanwhile it will result in the deterioration of our educational rights and the exclusion of the majority of students from a higher level of educations, since that will be accessible only to those who have the economic means to do it. Most of us will be blocked, because we don’t have the resources or the time needed. Additionally, we definitely do not want cops in our spaces, who will be on the sole mission of suppressing every spark of collective struggle that takes place in the university against the goverments’ destructive reforms, that target our educations and our lives. This bill will surely worsen our future, binding us in the meantime in harsh working relations and terms that exist.

Are the universties’ managements against the bill or they support it?

As a result of our pressure, most of the universities managements have taken a standing against the upcoming reforms and have asked from the government for a restructure of the bill, arguing for the most part against the existence of university police. Their argument has been mostly imposed from the students’ and workers’ of the university collective opposition.

What about last Thursday’s protests?

Last Thursday, we university students, along with teachers and school students went out on the streets collectively in many cities of Greece, to protest against the upcoming bill and demand that is withdrawn and that our universities and all schools operate again after almost a year of cyber education. In Athens, where I study, we organized a protest of 3000 students after a long time, proving that there is mass social distrust and opposition against our government.

Are the student orginized and what are they planning to stop the bill?

The students in Greece have been organized for decades, which is why we have succeeded in blocking destructive reforms time and time again. Through our student unions and general assemblies we come together, talk and make plans how to combat government policies and win. Free education is common good that has been gained through extreme social struggle and belong to the people, not the corporations. In order to protect it we have to become a massive and unstoppable force that can impose its needs for public education, health, democratic rights and honest work. We won’t back down until this bill is withdrawn and our universities and schools reopen with all health measures. We demand that the state increases funding for our education and health, and we will occupy the streets until that happens.

What is the government’s response to these protests?

The government is afraid of our collective struggles. They have mostly tried to repress and terrorize us with police violence and restrictions, but yesterday they failed to do so, because of our numbers and collective will. Instead they try to sabotage our struggle and fair demands through media propaganda, calling us unreasonable, dangerous and trying to put the blame on us for the situation. They say we are responsible for the spread of the virus because we rally on the streets, and that we are an enemy of progress -that is what they say this bill means.

And lastly, what are the other problems for the unvivertity students in Greece now? For example, in Turkey there’s a students’ mobility against the government’s policy of intervention to the universities’ autonomy…

Beside the fact that we face an attack against public education and the right of the people to study freely, the government has kept us away from our universities for almost a whole year, choosing even until this moment, to not do what is necessary and possible for the proper operation of our educational process. Our government does not care for our needs, which is quite clear from the fact that they don’t provide us with funding, but instead reduce the little resources that we have and spends billions on military equipment. In the meantime, they target the youth by increasing the time of military service by three months and making it mandatory from the age of 18. This move serves the sole purpose of dragging us in the imperialist games that our country plays against Turkey, alongside EU and NATO. Both countries’ ruling classes compete for gaining control and power over the broader region of the Aegean and the Mediterranean, in order to grow their grasp and increase their profits. Meanwhile, both the Turkish and the Greek youth have nothing to gain through this competition and, instead, need to stand united and fight against both their countries ruling classes in order to achieve peace and prosperity for both our peoples.